By The Capoeira Panda 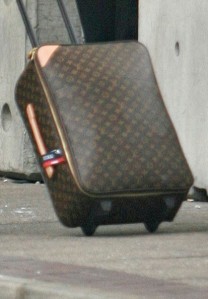 As she raises her face, Daisy looks into mine with a once-radiant smile that’s been watered down by tears that have left tracks in her makeup as they made the miles from her heart and out the gates of her eyes. Through our gate that she left open, I can see the glint of the early morning sun on her dusty Toyota Tercel, parked as best as she could manage in the tiny driveway already crammed with three cars, somewhat the same way those three huge LV suitcases are packed in her back seat and adjusted so she can see out the back when she reverses.

I step back to look at her after she leans forward to hug me. Her mascara leaves marks on my white tee but I don’t even care as I stare down into her sad eyes and feel mine change with confusion, then understanding, and finally, a sadness transferred by empathy that only true friends can share.

Friends… she’s my friend, and so are you. The two of you became more than just friends. I guess I should take the blame for that, and a whole lot more. I thought you would behave with her. I thought this one was different for you.

The first words that tumble into my head sound wrong. What am I supposed to ask? “Daisy, what’s going on?” The sight of this black woman, once strong, but now standing with this broken look in front of me has me pretty shook and I can see in her eyes the story she’s cried through all night.

Why ask a question when you already know the answer?

”Where you off to Daisy?”

She looks back at her car and, with a bit of disorientation in her gaze, looks around me into the house. Just as I’m about to repeat my question, she looks up at me and asks “He’s still asleep, isn’t he?” I nod. Then, “She’s in there with him, isn’t she?” in a small voice that isn’t really asking a question so doesn’t expect to be answered with half-truths or lies. So I sigh, and nod once more.

Yes, she is. The super-model type chic with the Peruvian weave you just had to have. She walked up to our table while we were at the club last night, poured herself a drink and sat on your lap. I told you to let her slide. “Dude, you & Daisy just got back together.” But you just smiled and said “What Daisy doesn’t know won’t hurt her.” But she did know. Thanks to her ‘friend’ Onyeka. Remember her? The one you turned down when she wanted you to hit that? She saw us, and went all Gossip Girl on us. *BitterLaugh* Hell hath no fury huh?

“You were right you know?” I look at her with the silent question mark posed above my head. “You told me not to go out with him. Not to try to be the one who saves the bad boy.” She chuckles, “I thought I could do it… but you were right.”

I tried to warn her. I knew my best friend as well as I knew her. But she wouldn’t listen, and you said she was different.

And then she turns accusing eyes at me and asks, “And you knew as well. Every time he did it, every time he was with someone else. You knew, but you didn’t say anything. But you’d always come with him when he needed someone to beg for him. How could you do that? I thought you were my friend.”

But I was your friend as well. And I always saw how miserable you both were without each other. My loyalties were ripped right down the middle and there was no way to tack them together. So I let you go through the motions of breaking up, begging, missing each other, getting back together… I stayed out of it.

“No! Don’t do that!” Desperation is splashed all over her face like a person who just knows it’s too late to jump out of the way, while looking at the headlamps of the car about to hit her. Her fingernail rips a tiny gouge in my hand as she holds me. “Don’t wake him up, Ade.”

She runs her fingers through her hair and closes her eyes for a minute. When she opens them, I see pain flash through them; followed by determination, and then plain weariness.

“You didn’t answer my question Daisy. Your bags are packed and stuff. Where are you off to?” She looks back through the gate and at her car like she’d forgotten it was there. “Here and there… I guess, anywhere but here.”

“But you can’t just up and leave like that babes. You really should talk to—“

“No. I just wanted you to know I was leaving. I may not be seeing him, or you, anytime soon. There’s just… a few things I’ve been needing to do.” She hugs me again with all the strength she has and looks up at me. This time, determination flickers in her eyes like a light bulb trying to stay on.

“See you around Ade… sometime, I guess.” And she goes out the gate and into her little Tercel.

“Who was that so early on a Sunday?”

“Easy man, don’t hurt yourself. You may want to sit down.”

“It was Daisy. She… she came to say goodbye…”

Hey all. I got back from Niger state on Tuesday. Glad to see a few people missed me, Remi & Moyin did their best to put stuff up. I’ve got a few ideas that went through my head in camp so, I’m gonna write as much as I can. Starting with this one (after I finish what I’m meant to write for ThinkTank of course.)

So yeah, constructive criticism is always good. What y’all think?

About The Capoeira Panda

Panda makes his home in the world of words and metaphors. In the hopes to be more than just a confused blogger, he currently works as the editor for an ecommerce company that was good enough to hire him, and lives with his flat mates & two imaginary dogs who get along just fine. He enjoys reading good books, writing, relaxing with his friends, & poking fun at his mother over the phone. When he's not doing any of these, he sometimes sits back and wonders why anyone expects to learn anything useful about him by reading this bio. END_OF_DOCUMENT_TOKEN_TO_BE_REPLACED
This entry was posted on Sunday, December 18th, 2011 at 12:46 pm and posted in Short Story. You can follow any responses to this entry through the RSS 2.0 feed.
« TWO
Fourth Day: Chapter Four (I) »

17 responses to “Daisy Came By”